Most Common Causes of Car Wrecks in Texas

Posted December 27, 2021 | by Robert Slim | in Accident & Safety Articles, Personal Injury Blog
Throughout my years as a car wreck attorney in Dallas/Fort Worth, Texas, I have handled my fair share of accident cases.  Even though every case has its own set of facts and circumstances, there are some themes that tend to become more common than others.  Here are some examples of the most common causes of car wrecks that I have noticed in my career.

“Speed kills.”  This is just not a meaningless saying.  In fact, of the fatalities in car wreck in the State of Texas in 2021, approximately 1/3 of those fatalities were due to speeding.  Speed limits are there for a reason.  They take into account the configuration of the roads, traffic congestion, as well as the roadway surroundings.  Failing to observe the posted speed limits not only puts you in danger, but also those around you.

Tailgating seems to be one of the most common causes of car wreck that I have seem in my career.  Following too closely accounts for the vast majority of rear end collisions.  Additionally, they account for many of the highway accidents which tend to cause more serious, multi-vehicle wrecks.

Failing to Yield the Right of Way Turning Left.

Failing to check your blind spot can lead to disastrous results on the road.  Not only do you risk colliding with the vehicle in the other lane, you also risk over-correcting and losing control of your own vehicle.  At the same time, ad river should avoid being in someone’ blind spot.  Essentially, if you cannot see the other driver in their own sideview mirror, then you are probably in that vehicle’s blind spot. 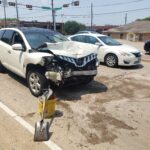 When it comes down to it, people are always on their phones.  Unfortunately, this also includes the time when they are driving a car.  You see it everyday on our Texas roads.  Put the phone down and concentrate on getting to your destination safely.  Nothing can be that serious as to risk a serious car wreck because you need to send a text.  If there is some sort of emergency and you have to use your phone, pull off the road to a safe place.

To combat this crisis, more and more laws and ordinances are being enacted to prohibit the use of phones while driving.

Robert C. Slim has been helping victims injured in car wreck since 1994.  If you have been injured in a car wreck, get the proper legal advice from an attorney who specializes in handling car wreck cases. Call now.  The consultation is always free and there are no fees until you collect on your case.
©Robert C. Slim Law Firm, PLLC. Copyright © 2019. All Rights Reserved. Privacy Policy
add bookmark