What happens if someone is issued a traffic ticket from a car accident?

What happens if someone is issued a traffic ticket from a car accident?

I was involved in a car accident and the other driver was issued a ticket by the police.  What effect does that have on my claim against the other driver for personal injuries I sustained in  the accident.

Most of the time, and police officer will not issue a citation at a car accident.  This is mainly due to the fact that the officer did not actually witness the traffic violation that led to the accident.  However, if the officer believes that the physical evidence and eye-witnesses are strong enough, the office will issue a citation to the at-fault driver for some traffic violation.  The effect this citation will have on your injury claim will depend on how the ticket is finally handled.

A traffic ticket is considered a criminal offense.  Of course, it is not as serious as murder or armed robbery.  But for all legal purposes, it is considered a criminal offense since it is the State bringing the charges and seeking to punish the offender.  On the other hand, a personal injury case is a civil claim since the dispute is between private citizens for recovery of money damages.

Since the burden of proof is much higher in a criminal case (“beyond a reasonable doubt”) than in a civil case (“preponderance of the evidence”), then a conviction in a criminal case is admissible and conclusive in a civil case arising out of the same event.  For instance, let’s say you are involved in an intersection collision with another vehicle that ran a red light.  Based upon the evidence at the scene and the witnesses, the police officer issues a traffic ticket to the other driver for running the red light.  If the driver is convicted for the ticket, either by pleading guilty or being found guilty after a trial, then the driver is automatically deemed legally responsible for causing the accident in the civil case.

However, the result of the ticket must be a guilty finding either by a plea or by a trial.  A plea of “nolo contendre/no contest” or “not guilty” is not admissible in the civil case unless there is a subsequent finding of guilt.  Most tickets are disposed of by a plea of “no contest,” a short duration of probation, and/or defensive driving.  Rarely do tickets go all the way to a finding of guilt.

Likewise, if someone is injured in an auto accident and the other driver is facing a ticket, then it might be worth the injured party’s time and effort to show up on the appearance date of the other driver’s ticket and ask the prosecutor not to accept a plea of “no contest.”  Although the prosecutor is not bound by your request, he/she might be willing to push for a guilty plea especially if there are serious personal injuries and the eye-witnesses are willing to cooperate. 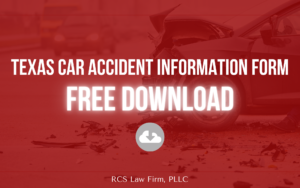